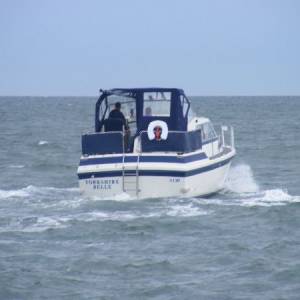 Having done my dayskipper practical earlier in the year with York Cruiser Training Centre and had Broom Boats check Yorkshire Belle over during the Winter service it was time to have a short sea trial. Some friends with a steel hulled motor cruiser they bought in Holland two years ago had also expessed a wish to give it a try too so the idea was to do it in company-a necessity in their case because they do not have VHF or any nav aids. The plan was to do the quick hop out of Great Yarmouth and back in at Lowestoft and a day was chosen subject to weather.

As it happened the whole week's forecast was bad apart from a window on the Sunday so we arranged to meet at Yarmouth Yacht Station around lunchtime. Various forecasts were consulted and all were different so as our friends' son had a car parked nearby we decided to drive to the sea front to have a look.
Although it was windy it was offshore and the water was fairly flat so we decided to go for it.

Windscreens and canopies down to get under three low bridges we set off and for the first time ever turned left at the mouth of the Bure. Passing the big yellow hire boat warning sign felt a bit like seeing the one at Traitors Gate at the Tower of London-Abandon hope all ye who pass through here!!

Clearance was obtained from harbour control and we headed down river with the tide. After the final bend the sight at the entrance was somewhat unnerving as it looked rather choppy and so it turned out to be. Our flat sea wasn't. Pressing on nevertheless I set course using the plotter for the first marker and our friends contacted us by mobile phione to check that we wanted to continue. It being my first trip in this boat which some say was never built to go to sea, but which Brooms said it was, I did reconsider for a moment but decided to give it a try.
Although we were bouncing around a lot the boat seemed happy enough so we carried on South and eventually arrived at the mouth of Lowestoft harbour in a beam on swell which violently rocked us about for a hundred yards, and then peace and calm inside. I obtained clearance to enter the port, didn't need a bridge lift as we dropped the canopy again, and onward passage to Mutford lock and into Oulton Broad where some other friends were waiting.

Despite lots of crashing and banging nothing got broken. I think one champagne glass was leaning over a bit! Having originally decided between us we would not do it in anything more than force 1/2 it had turned out to be force 4/5 so at least we now know what to expect in future.

Time for a beer! 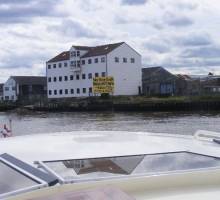 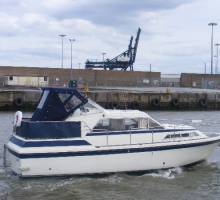 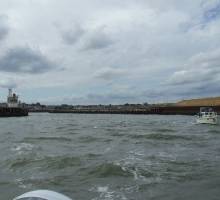 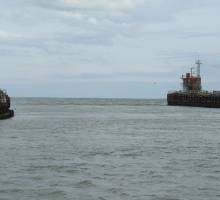 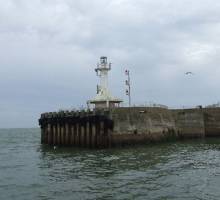 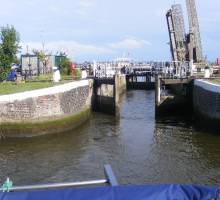 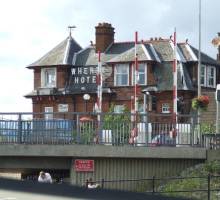 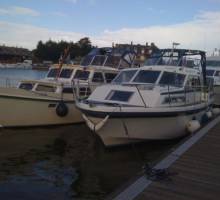