Boatshed Yorkshire's Broom 32 gets a makeover 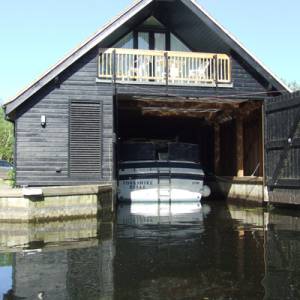 There is a well established conviction amongst yacht brokers that there is no such thing as an owner improvement. One of the things I have learned whilst running Boatshed Yorkshire is the importance of maintaining a boat well inside and out if you want it to keep its value. Refurbishment may enhance its value, although the amount rarely equates to that spent, while not doing it will erode its value. Like many things in life you have to run in order to stand still.
Having decided on a refit or other major boat renovations there is no substitute for getting it done professionally. All boat brokers will have seen bodged jobs done by owners which actually devalue the boat hence the belief that there no such thing as an owner improvement.
It was with this in mind that I decided last year that our 1983 Broom 32, Yorkshire Belle, could do with an interior update as it still had the 1980s style patterned upholstery, blue carpet and orange curtains-see before photos. At first I had a local firm-our boat is kept in a wet shed in Horning on the Broads-go over her and come up with some ideas. I was surprised to receive a quote which was double what I had expected. And I was not exactly sold on the choice of materials.
A few weeks later I was at Oulton Week talking to a surveyor I know who does business with Broom Boats in Brundall and he suggested that I at least talk to them as in his experience they offered good value money and were not as expensive as I might have thought. I arranged to visit them at the Southampton Boat Show to see at firsthand what they could do. I met Andrew Stone their Customer Services Manager on one of the exhibits and it soon became obvious that there was more that could be done than simply replacing fabrics. We discussed redesigning the saloon seating to be more like furniture as in their newer boats since it is never used for sleeping on anyway.
In October we were on a week's holiday so we went South and called at the yard to discuss the detail. Fabrics and carpet were selected, new foam was to be included with memory foam in the master cabin, holly and teak flooring in the galley-much more practical than carpet, new light fittings and many other outstanding jobs.
When the quote came it was 5 times what I had originally intended spending but the project had grown. I then decided it would be a good idea for Broom Boats to do the winter servicing and check the boat over generally since they had not seen her since building her 27 years ago. A number of other improvements rose from this-new automatic fire extinguisher, new bilge pumps, loose engine mounting nuts and so on.
It was end January before we could take the boat to them due to weather and tides-it's a 6 hour journey by boat, 20 minutes by car-and during the next 4 months we called in to review progress from time to time. By the middle of May all was ready and we had a shake down cruise to ensue all was OK before we took her away, and of course it was, but then that’s what comes with using a professional boat builder. My surveyor friend happened to be at Oulton Broad that weekend and he and his wife were very impressed with our “new boat”.
Three weeks later we called to take it back to its mooring and of course pay the bill- exactly 8 times my original budget but well worth it as you can see from the after shots. It's like a new Broom inside!
Yorkshire Belle is now snug again in her shed and what was already a desirable boat must now be best in class. The moral of the story is that any work on a boat should be carried out in a professional manner and ideally by the original builder if possible in order to maintain or even enhance its value.
Just by coincidence I also happen to have a nice Broom 35 for sale. Please feel free to contact me, Andrew Holmes of Boatshed Yorkshire about this or any of the other boats for sale.

If you have a boat to sell then please get in touch, I am always happy to discuss our boat brokerage service and give an honest valuation of your boat. 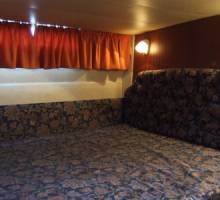 The main cabin before 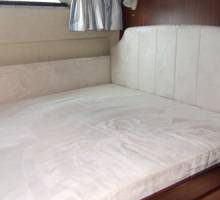 and with new cushions 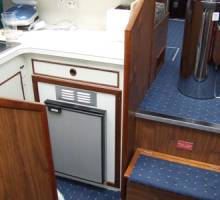 The old galley before Yorkshire Belle went to Oulton 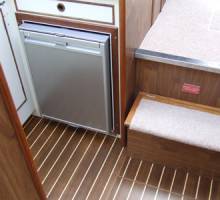 and after showing the new holly and teak floors 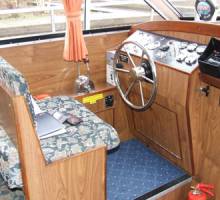 The helm station before 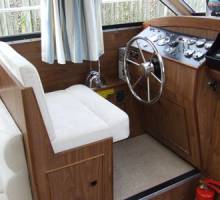 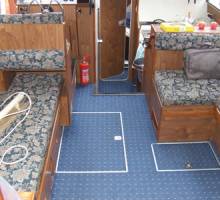 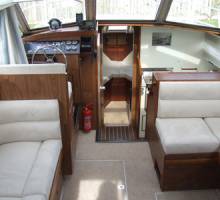 and the new updated version 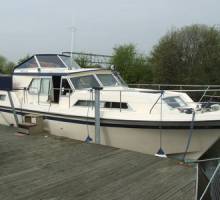 This Broom 35 is for sale with Boatshed Yorkshire