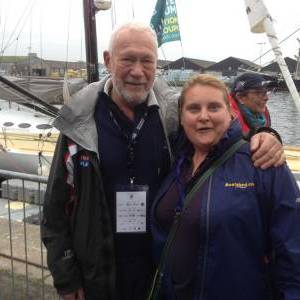 Great sailors keep on sailing...and racing in the case of Sir Robin Knox-Johnston, who has just been named ‘Yachtsman of the Year 2014’ for the fourth time!

In 1969 Sir Robin became the first man to complete a single-handed, non stop circumnavigation of the globe in his 32 foot boat Suhaili. The boats got bigger and faster and the challenges continued: in 1977, in a Maxi yacht, he competed in the Whitbread Round the Word Race; in 1994, in a catamaran, he was the second winner of the Jules Verne Trophy for the fastest circumnavigation; in 2007, in Saga Insurance, he was the oldest competitor in the Velux 5 Oceans Race, and last year in his Open 60, Sir Robin at 75 years old, came third in the gruelling Route du Rhum Ocean Race from St Malo to Guadaloupe. His Open 60 is called Grey Power - is he trying to tell the rest of us something? Certainly, age and the World’s oceans are yet to slow down this true sailing legend.

But even the greatest sailors decide to sell their beloved boats, eventually. Sir Robin has asked Boatshed to sell his racing boat and Grey Power is currently for sale with Boatshed Performance, the group’s specialist racing brand on the south coast of England.

Boatshed Performance is a specialist brokerage for the sale and purchase of custom built racing yachts (including Volvo 70s, Volvo 60s, Open 60s, Open 50s, Class 40s, Open 30s and Mini Transat yachts) and performance cruisers and one design yachts set-up and maximised for competitive Club, IRC and RORC racing (such as Maxis, TP 52s, Farr 45s, Farr 40s, Swan 42s, 40.7s, First 40s, 34.7, Kers, X Yachts, J Boats, Sigmas, Reflexes, etc). Whether you are selling a successful Volvo 65 after the Volvo Ocean Race, or a much admired 40 foot performance cruiser complete with a full suit of costly racing sails, which has been successful at IRC inshore and RORC racing; or if you are looking for a Class 40 to compete on the short-handed circuit, or a fully equipped J Boat to race around the cans in the Solent at the weekends, Boatshed Performance offers a complete service to the racing sailor.

We recently talked to Sir Robin about the Route du Rhum, ocean sailing and what boat he might buy next:

Q: “Sir Robin, thank you for taking the time to see us today, and congratulations on your Yachtsman of the Year award. We’re here to talk about Grey Power, and did you perform better than expected in the Route du Rhum?”

SR: “I think better than other people expected, is the way I’d put it. I think they thought it was a bit of a joke in the beginning but, once I got it going in the Trades, then she was rumbling along nicely and I think people were a little surprised how fast she was going.”

Q: “Did you have to repair much en route?”

SR: “Very little. The Jib fell down because the lashing gave way, and it wasn’t sensible to go up the mast to sort it because, if the steering had gone when I was up there, it would have been a precarious position. So I considered the risks and raced without it, which wasn’t a huge handicap. She was under reacher most of the time, but otherwise, no, not really. There was very little to do apart from the daily checks of everything which one always does at sea.”

Q: “I understand the plan is to race her back and have you got much to do?”

Sir Robin: “A couple of little jobs. I need to check out the instruments. There’s a job to be done on the keel, and basically that’s it. I mean, once we go back out to the boat, it’s just hoping that everything works when I switch it on.”

Q: “The way that you’ve got the boat set up, it’s a reasonably simple approach. Do you think that that’s one of the keys to successful racing and cruising; a more simple approach?”

Sir Robin: “Well, I think it’s the key because we can over complicate boats and, in fact, an awful lot of manufacturers with suppliers of posh equipment will over complicate them. You can have this little gizmo and that little gizmo, and then you spend most of your time in port having them all fixed. So I think the simpler you make the boat, the better. Electronics and boats don’t go well together anyway, so try and keep them to a minimum.”

Q: “If you have an unlimited budget, what would be your ultimate boat?”

Sir Robin: “I think my ultimate boat would depend whether I’m cruising or racing. If it’s for racing, I think a 50 foot trimaran but, if it’s cruising, a 55 foot, good, strong heavy boat; something you can take through the ice and go into the tropics with. Something I could make good ocean passages in. So, when you get caught out in the oceans by bad weather, you know you’re safe.”

Good advice from one of the World’s great ocean sailors, who, like many other owners, trusts Boatshed to sell his boat when the time comes to move on.